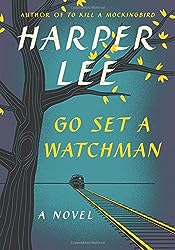 As I typed the title to this post, it occurred to me I never thought I would be reviewing another book by Harper Lee. And yet, here we have Go Set a Watchman. I have seen a lot of people I respect saying that they will not read this book because they are not sure what Harper Lee’s intentions are. She is 89 years old. She can’t hear well. And isn’t it suspicious, they say, that this novel came out after her great defender, Alice Finch Lee, whom Nelle (as she is known to friends) called “Atticus in a skirt,” died?

When I was at Kenyon College at the Writer’s Workshop for Teachers recently, I had the pleasure of making the acquaintance of Nick White, who read one of his short stories and participated in a Q&A with Nancy Zafris (whom I also had the distinct pleasure to meet). We were at a wine and hors d’oeuvres gathering, and Nick was trying to figure out how to spell hors d’oeuvres in a text to his mother, and I was no help because I had already had a couple of glasses of wine. I remarked to Nancy that I had moved up to Worcester, Massachusetts from Georgia about three years ago. She looked at me gravely and asked, “How is it?” I shrugged and said something about rednecks being the same everywhere. She agreed to that. Nick and I started talking about this new Harper Lee book. He said he was probably going to be a “terrible person” and read it, and I confessed I would, too, because I “can’t NOT read a new book by Harper Lee.” And Reader, despite the misgivings you might have, I would encourage you to read it, too. Yes, even if it tears down your idol.

You have probably read the spoilers. I think CNN (it might have been CNN—I don’t keep track anymore because the news is like so much background noise most of the time) was blaring “Atticus is a RACIST” every ten minutes yesterday. And maybe you also heard about Jem because that happened in the first chapter. Maybe it isn’t even necessary to sum up what happens in the book, but it is, in every way, as much a coming-of-age story as To Kill a Mockingbird. Do you remember in To Kill a Mockingbird when Jem is trying to explain people to Scout? He is categorizing people into different groups, and Scout doesn’t get it.

“Naw, Jem. I think that there is just one kind of folks. Folks.”

Jem turned and punched his pillow. When he settled back his face was cloudy. He was going in to one of his declines, and I grew wary. His brows came together; his mouth became a thin line. He was silent for a while.

“That is what I thought, too,” he said at last, “when I was your age. If there is just one kind of folks, why can’t they get along with each other? If they’re all alike, why do they go out of their way to despise each other? Scout, I think I am beginning to understand something. I think I’m beginning to understand why Boo Radley stayed shut up in the house all this time…it’s because he wants to stay inside.”

Readers tend to pay a lot more attention to Scout here because they want to think they agree with her, but it is Jem who has figured out something really profound. When Scout is upset in Go Set a Watchman, she says something almost exactly the same to her Uncle Jack: “I thought we were just people” (189). In the twenty years between the two books, Scout still believes. She is actually quite orthodox about it. So, when she comes back to Maycomb and she discovers that her illusions about her sleepy little town and the people in it are not reality, she feels as if she has been pulled out of the world. Nothing makes sense. She also seems to channel the reader when she rails at Atticus:

“I looked up to you, Atticus, like I never looked up to anybody in my life and never will again. If you had only given me some hint, if you had broken your word with me a couple of times, if you had been bad-tempered or impatient with me—if you had been a lesser man, maybe I could have taken what I saw you doing [attending a white supremacist meeting]. If once or twice you’d let me catch you doing something vile, then I would have understood yesterday.” (250)

A lot of us who read this book will feel the same way. We have held Atticus up as a paragon of virtue, a man ahead of his time. But what we failed to remember is that he is a man.

Scout’s Uncle Jack says, “now you, Miss, born with your own conscience, somewhere along the line fastened it like a barnacle to your father’s… You never saw him as a man with a man’s heart, and a man’s failings” (265). In a sense, Scout needed to come home and break with her father (after a fashion)—yes, even Atticus Finch—in order to be her own person.

The novel makes a profound statement about the failings and frailty of human beings. It has its own literary merit. It will suffer in comparison to To Kill a Mockingbird. After all, that’s one of the perfect novels, and this novel is an earlier draft. I will add that in my opinion, it’s a pretty excellent draft. It is easy to see how Lee’s editors saw the sparks of Lee’s novel in this one and encouraged her to write about Scout as a child. There is one hilarious scene when Jem, Dill, and Scout enact a tent revival in the yard, and there are several great scenes from Scout’s adolescence. Scout has not changed. She is as feisty as she always was. I think this book is, on the whole, a great read.

The book is not as poetic as TKAM, but it has its moments. It relies way too much on dialogue, particularly at the end. There are some parts that are a bit muddled and confusing in their wording and perhaps in their point, but as a whole, it hangs together well. Other reviewers have said it’s more complex than TKAM, and I would agree. It explores the complexity of human beings, particularly people we love (and especially people we love who hold abhorrent views). I do NOT think, as Michiko Kakutani said in her NY Times review, that this novel upends everything we thought we knew about Atticus Finch. Instead, the novel gives him some interesting and unsettling failings that nonetheless can be reconciled with what he did in the courtroom when he defended Tom Robinson (the fact that he is acquitted in this book, and it wasn’t changed to reconcile with the events of TKAM was a mistake, I think—and it shows this book had very little outside editing).

In terms of the controversy surrounding its publication, there is this to consider: this book was discovered, and it would have been published after Lee died without her blessing. It just would have. There is no way a discovery like that is made and people don’t want to bring it to light, either for good reasons or bad ones. Did Lee want the book to be published now? I don’t know. But either way, it would have happened. One way to think about it is this: publishing the book while Lee is still alive means she will at least reap some of the benefit from the sales. If it had been published after her death, none of it would have gone to Harper Lee at all. This new books has not diminished Lee’s achievement with TKAM, and it has brought interesting nuance to beloved characters we thought we knew.

I haven’t looked forward to a book’s release so much since the last Harry Potter book, and I can’t remember the last time there was so much discussion about a book. Perhaps some of my friends will think I’m bad for reading it, but like I told Nick White, there is just no way I can skip a Harper Lee book. I just can’t. I am really glad I read it. It has some interesting things to say about the complexities of the South, and as Mary Badham (who played Scout in the movie) said during a Q&A livestream I watched, this novel is interesting particularly in light of what we have experienced as a nation in the last year.

I struggled over how to rate this because it’s impossible not to compare it to TKAM, so I asked myself, if it weren’t Harper Lee, what would you have rated it? I probably would have given it a 5 then. I do grade pretty easily, but I also can’t remember the last time I gulped a book in one sitting. Surely, that says something.

The Myth of You and Me
Outlander (audio), Diana Gabaldon
Wuthering Bites, Well, Bites

Bad Behavior has blocked 798 access attempts in the last 7 days.