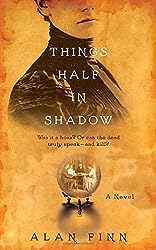 Alan Finn’s novel Things Half in Shadow starts with a fun premise: the protagonist, Edward Clark, is a Civil War veteran and reporter who is assigned the task of exposing Philadelphia mediums as frauds. He has a background that no one, least of all his ingenue fiancée, Violet Willoughby, knows about—his true identity is Columbus Holmes, son of the great magician Magellan Holmes, who killed his wife (Columbus’s mother) and is now rotting away in Eastern State Penitentiary. Unfortunately, Edward makes a nemesis out of a fraudulent medium named Lucy Collins, who threatens to expose Edward’s secrets unless he agrees to help her put her biggest competitor out of business. But Edward and Lucy get a little more than they bargained for when they discover Lenora Grimes Pastor is a real medium—and they become implicated in her murder when she dies mysteriously in the middle of a séance.

This book is fun, and it moves at a brisk pace. The characters, particularly Edward Clark and Lucy Collins, are engaging. The historical details ring true (mostly). However, I didn’t find the ending satisfying. It’s probably the case that the author intends to write a sequel, but few of the loose ends are tied up, and the ending felt rushed compared to the pace of the rest of the book. The clues were not carefully laid for the reader to notice. The reader doesn’t want to feel completely blindsided by the events in the last 100 pages of a mystery. I think it’s fine to surprise the reader, but the dots need to connect, and the clues need to be laid. Otherwise, it feels like a cheat. I would have said it was sitting on four stars until the ending. However, most of the reviews I’ve seen rate it higher than I have, so your mileage may vary, and it’s definitely worth checking out. In fact, most of the reviews I saw gave it 4 or 5 stars. In the right hands, I think it would a fun movie. It sure has enough action scenes for a novel set in a time that couldn’t include a car chase (it did include a carriage chase, if you can believe it). I can’t say that it didn’t hold my interest. I was just looking for more out of the ending.

4 thoughts on “Review: Things Half in Shadow, Alan Finn”