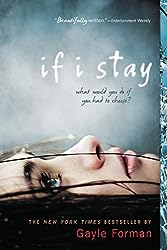 Gayle Forman’s novel If I Stay is the story of Mia, an accomplished cellist and senior in high school. Mia lives in Oregon, and when the schools close for a snow day (“I think the county overreacted,” Mia says), the family decides to make a day of it and visit friends, family, and the bookstore. In a split second, Mia’s entire life is shattered when her family’s car is hit by a pickup truck. Mia finds herself outside her body, watching as the ambulance arrives, watching as she is taken to Portland by medivac, and watching as she lies in a coma in the ICU. Mia realizes that she must make the decision: “I realize now that dying is easy. Living is hard” (175).

I’m a little late with If I Stay. I think a lot of folks have read it already, so it might not be new to you. In fact, it’s been on my TBR list for years. This is exactly the kind of book I’d have been in love with as a teenager. I must have re-read Judy Blume’s Tiger Eyes countless times. In many ways, Mia reminds me a bit of Davey in Blume’s book, though the tragedy she must cope with is much larger in scope and also involves her own personal fight for recovery. I think if this book had existed when I was in high school, I’d have re-read it as much as I re-read Tiger Eyes, and I can’t praise it much more highly than that. Adam is definitely the kind of boyfriend I’d have wanted in high school. Like Mia, I was a musician in high school with some starry-eyed dreams of actually being good enough to go to Juilliard. Unlike Mia, I knew I didn’t have the talent it would take to do it. The cello is, in fact, one of my favorite instruments, and my daughter played it in school. I think I would really have connected to this story if I’d read it in high school.

So what about adult me? Well, at this stage of my life, I recognize Adam is NOT the kind of guy I’d want to be with (nice enough, but the rock musician types are more cool on paper). I consider music important, but it doesn’t consume me as much as it did when I was in high school, and perhaps that is my loss. I have really wanted to get back into playing either the flute or the guitar (or both) again. I’m in a different place, which is as it should be, and it makes me a little sad this book wasn’t around when I was in high school (but I think Gayle Forman was probably in high school right then as well). It’s a great book. I enjoyed it a lot. It’s the first time in a long time that I’ve considered how much more I might have liked a book if I’d read it at a different time. As it is, it was well-written, but some of the cracks showed a bit more to adult me. They wouldn’t have bothered teenager me at all. In fact, I might not have seen them as cracks at all.

Still, I really enjoyed the book, and as for grabbing and keeping my attention, it absolutely did. I definitely want to read the sequel.

I found this blog post on hosting the ultimate book group party for this book (very cool ideas). I also found an interesting Bustle post about the fictional band in the movie soundtrack. Speaking of the movie, some liberties were taken with the story, but f you have Amazon Prime, it’s free to watch with your membership. It wasn’t bad.

I made a Spotify playlist based on the music mentioned in the book, on Gayle Forman’s website, and the movie. Caveat: I couldn’t bring myself to include Bette Midler’s song “The Wind Beneath My Wings” (though it’s mentioned in the book), and I cut Alice Cooper’s “School’s Out” as well. I don’t hate that song, but it doesn’t fit well with the rest of the punk/indie and classical tracks in the playlist. I guess Frank Sinatra doesn’t either, but he stayed in.