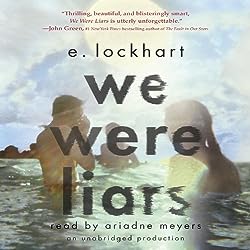 Wow. I’m going to try not to spoil anything for you because the less you really know about E. Lockhart’s We Were Liars going in, the more you are likely to enjoy it. Having said that, I know a little taste of the book is sometimes necessary for readers who might be on the fence about reading a book. Here goes.

Cadence Sinclair Eastman, known as Cady, is the granddaughter of the wealthy and WASPish Harris and Tipper Sinclair, who own a private island near Martha’s Vineyard complete with a full staff, a large manor house where Harris and Tipper live, and three houses for each of Harris and Tipper’s daughters: Carrie, Bess, and Penny. Carrie is the oldest and has two sons: Johnny and Will. They live in New York City. Bess, the middle daughter, lives in Cambridge with her four children: Mirren, twins Liberty and Bonnie, and Taft. The youngest daughter, Penny, is Cady’s mother. They live in Burlington, Vermont. Each summer the family gathers to spend their vacation on the private island, known as Beechwood Island.

Cady can’t remember much about the year fifteen summer due to an accident she had, and a shroud of secrecy surrounds the story. Her family does not speak to her about it. Cady is desperate to return to Beechwood Island and see her two cousins Johnny and Mirren along with Gat, nephew of the man Cady’s Aunt Carrie is living with. Gat has been visiting Beechwood Island as a guest of the Sinclairs for years, and over time, Cady has fallen in love with him. Together, they were the Liars, and they forged a close summer friendship that waned as they returned to home and school each year, but picked up right where it left off the following summer. But even the Liars are strangely silent and reluctant to talk about Cady’s accident.

I anticipate that some readers will have difficulty identifying with the privileged Sinclairs and their idyllic summers on their own private island. I admit it’s a barrier, but if you take a peek at the family dynamic, it’s a great deal easier to feel empathy for the family. They have a secretive, fractured family. One of my favorite aspects of the novel was its connection to King Lear and an assortment of fairy tales. In fact, I’m wondering if this book might not be a good one to bring into my AP Literature class, which will be reading both King Lear and Jane Smiley’s modern adaptation A Thousand Acres. I could see a small literature circle group really enjoying the connections between this novel and the other texts.

I understand that some readers don’t like the writer’s style. I listened to the audio book, and the narrator naturally had a great deal of influence over how the text was interpreted, so I can’t speak to those complaints except to say that if the style is bothering you, you might try listening to the book instead. I don’t think I have ever finished an audio book in one day before. I just wanted to find out what would happen. The suspense of not knowing what was going on with Cady’s family or her accident kept me up late until I finished the book some time after 1:00 A. M. Saturday night.

This was a perfect start-of-summer read, even if the story is a tough one. While it is YA, I would classify it as more mature YA—for high schoolers rather than middle schoolers, but it’s definitely appropriate for students in high school, whom I would imagine would really love it. I know this is the kind of book I would have inhaled had it existed when I was in high school.

Ariadne Meyers’s narration is perfect for the story. She emotes when necessary, and she pulls the cynical teenager when it’s called for. I liked her reading so much that I downloaded another book that I’ve been wanting to read that she also narrates through Audible.

2 thoughts on “Review: We Were Liars, E. Lockhart, narrated by Ariadne Meyers”