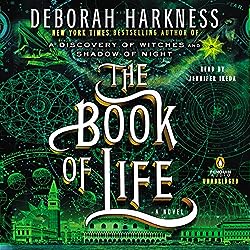 Deborah Harkness’s All Souls Trilogy is a bit like Twilight for adults, with a more compelling heroine and a few more thrills and chills. The last book in this series is The Book of Life, the denouement of Matthew Clairmont and Diana Bishop’s unlikely story with a few hints of potential sequels. In the first book in the series, A Discovery of Witches, reluctant witch Diana Bishop calls up the mysterious manuscript coded Ashmole 782 from the Bodleian Library at Oxford, only to attract the attention of several other creatures—other witches, daemons, and vampires. Specifically, a vampire named Matthew Clairmont. Diana and Matthew strike up an unlikely (and forbidden) relationship. In the second book, The Shadow of Night, Diana and Matthew timewalk back to 1590 to try to track down Ashmole 782 again and meet almost literally every historical figure of importance who lived at the time. Matthew also turns out to be one of those important historical figures in disguise. In this final book, Diana and Matthew pull out pretty much all the stops to try to find the missing manuscript, now known as the Book of Life, which will tell the secrets that the witches discovered centuries ago. This gruesome book, made from the skin, hair, and blood of witches, daemons, and vampires, is believed by witches to be the first grimoire and to hold the secrets of witchcraft and by vampires to hold the secrets of their origins. As it turns out, Matthew’s bloodthirsty and deranged son Benjamin is also after the book. And Diana. And possibly their children. Oh, and Matthew, if it will lure Diana to him.

Okay, where to begin. This book isn’t bad. It’s pretty cheesy, and I can’t figure out why. I kind of liked the first book in this series, but it seemed like each successive book just got crazier and crazier. Diana and Matthew are supernatural creatures, yes, but why do they have to be the most powerful or crazy of their ilk? Why does she all of a sudden have to be Superwitch? I liked it better when they were nosy about their origins, but the fate of their entire world didn’t have to rest on what they managed to do (or not). I guess maybe I’m a bit over vampires unless they are awful like Dracula. I did enjoy a very cheeky joke Matthew made about Twilight in the middle of the book. Jennifer Ikeda is a good reader, as well. There is a pretty awful torture scene reminiscent of Jamie Fraser and Black Jack Randall, though without, I suppose, the element of rape. What it is with all the torture p*rn in women’s fiction now? (By the way, that word is not spelled out because I don’t want weirdos who are looking for that stuff to land on my blog and be super disappointed.) I also felt like Harkness was stretching to bring back all the characters from the first book, even if if they only got a cameo. For some reason, that irritated me. Mainly because I didn’t really remember them that well after all that time had passed. I found the whole blood rage deal that Matthew had and passed along to some (not all, apparently) of his children an irritating plot point. It seemed to me like an excuse for Matthew to be a dick sometimes more than anything else. And on top of everything else, no one really explains it satisfactorily to me. And finally, the Book of Life is a sort of letdown. That’s IT? That’s what the big secret was? I figured that sort of thing out about creatures from the first book. I wanted a big reveal. You let me down, Diana Bishop. You let me down. And I guess the biggest issue I have with the books in general is that I don’t particularly like Diana or Matthew. I mean, I don’t wish them ill, or anything, but I don’t like them nearly as much as some of the secondary characters. I can’t remember if I mentioned how I feel about them in earlier reviews I wrote. Diana can be tiresome in her ways, but Matthew is controlling, and it grates on me that a controlling guy like that is being put forth as an ideal romantic boyfriend/husband. Yuck. At least he figures out by the end of the book that he needs to step it back a notch.

So, I didn’t hate it, but I didn’t love it either, and it gets three stars.

Review: In the Shadow of the Banyan, Vaddey Ratner
Review: The Mirror and the Light, Hilary Mantel, narrated by Ben Miles
Review: Song of Solomon, Toni Morrison
Share