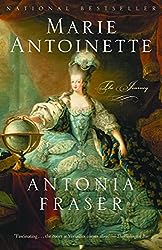 Antonia Fraser’s comprehensive biography Marie Antoinette: The Journey inspired a film starring Kirsten Dunst in the role of the queen some years ago. Essentially, Fraser’s portrayal of the queen is sympathetic. Not well educated or especially groomed for a role of greatness, Marie Antoinette found herself packed off to France at the age of fourteen to make a political marriage. It seems the French never really warmed to her, and in the end, she became a scapegoat for the entire French Revolution. It’s hard not to feel some sympathy for her, and Fraser clearly wants the reader to feel sympathy for the woman whom history misremembers as suggesting, upon hearing of the lack of bread and subsequent starvation of her people, “Let them eat cake.”

I started reading this book over a year ago—on February 8, 2015, to be exact. I have been picking away at it here and there, but I never found it so engaging that I couldn’t put it down until the Revolution started and Marie Antoinette’s tribulations truly began. I think, and I’m probably not alone in this, that the most interesting thing about Marie Antoinette is her death. It sounds terribly cold and callous to put it that baldly, but as a queen she was fairly similar to most aristocrats. A little vain, a bit frivolous, and not terribly smart. She seems to have been devoted to her children. She also seems to have had genuine great affection for Louis XVI. Antonia Fraser argues that Marie Antoinette had an affair with Swedish Count Axel von Fersen. Whatever the true nature of their relationship, they were great friends, but Fraser really seems to want this affair to have happened, and I think her treatment of that particular aspect of the biography suffers as a result—too much conjecture, and not enough real evidence, especially given how carefully Fraser describes the queen’s utter lack of privacy from the moment she entered France. The whole story just doesn’t hang together well.

On the other hand, the portrait Fraser paints of the imprisoned Marie Antoinette as pious, stoic, and forgiving is admirable and seems to square well with other historical evidence I’ve read. In her last days, her treatment was much harsher than her husband received prior to his own execution. She was separated utterly from every aspect of her former station in life, from her children and other family to her comforts and even occupations. In the end, she emerges as an admirable figure through the fortitude she displayed as she faced death. There is a horrible sentiment expressed by the Misfit in Flannery O’Connor’s short story “A Good Man is Hard to Find” after he shoots and kills the Grandmother: “She would of been a good woman if it had been somebody there to shoot her every minute of her life.” It’s a horrible thing to say, I suppose, but Marie Antoinette was undeniably a brave woman at the end of her life. Whatever she may have been in life, she didn’t deserve for her life to end the way it did.

Fraser’s biography is, in the end, not without its faults, but it is certainly thorough and the reader senses the affection the author feels for her subject. Perhaps because this book is Marie Antoinette’s story, and not a story, necessarily, of the Revolution that killed her, one will not learn a great deal about many of the other movers and shakers in the events of the time, though Fraser did clear up a few issues I had difficulty understanding—why Marie Antoinette was so reviled, for one thing, and on a more minor point, the difference between the Girondins and Jacobins (I was quite fuzzy on that point, thought I admit I haven’t read widely on the Revolution, and that confusion may easily have been cleared up elsewhere as well). Robespierre, for example, is mentioned only a handful of times. While he never seems sympathetic in anything I’ve read about him, I can’t deny he’s a great deal more interesting to me than Marie Antoinette.

In some ways, I don’t feel like I’ve been quite fair to Marie Antoinette in this book review, but the truth is that I didn’t quite find her fascinating enough to merit the comprehensiveness of this biography, however fascinating her death might have ultimately been. In a way, I sort of felt like one of those gawkers passing an accident on the side of the road. Still, I can’t deny that Fraser does her best, and Marie Antoinette comes to life and ultimately emerges as a sympathetic person in the pages of this book.

Bad Behavior has blocked 344 access attempts in the last 7 days.