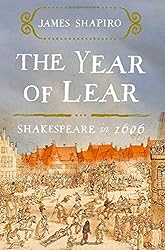 2 thoughts on “Review: The Year of Lear, James Shapiro”