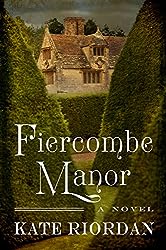 Kate Riordan’s novel Fiercombe Manor is the story of Alice Eveleigh, a naive young woman who lives in 1930’s London with her parents. Alice becomes pregnant after having a short affair with a married man. To spare her family shame, Alice’s mother sends her off to Fiercombe Manor in Gloucestershire, where Edith Jelphs, an old friend of Alice’s mother, lives. Alice’s mother tells Mrs. Jelphs that Alice’s husband has tragically been killed in an accident. She plans to collect Alice and the baby and put the baby up for adoption after it’s born (though she does not confide these plans to Mrs. Jelphs).

As Alice settles into Fiercombe Manor, she notices a sort of brooding sadness in the valley, and over time, she comes to learn about the tragic history of the Stanton family, who owns the manor. Alice is particularly transfixed by the story of Elizabeth Stanton, who had been Mrs. Jelphs’s employer when Mrs. Jelphs first came to Fiercombe as a young woman. Elizabeth’s imprint seems palpable in a strange presence Alice feels as well as a diary and a few keepsakes left behind. Alice spends the summer of her confinement wrapping herself into the mystery and wondering if her own fate might be somehow wound up in the tragedy surrounding Fiercombe Manor. She begins to wonder also if the valley isn’t cursed in some way that she will not be able to escape.

I enjoyed this book quite a bit. The house is a very real character in the book and reminded me not a little of Thornfield Hall or Manderley. Is the house haunted? Can tragedy truly linger around a place? Or is Alice just sensitive and emotional because of pregnancy hormones? She wonders all of these things herself. She also finds herself drawn to the Stanton heir, Tom, who befriends her and shares some of his own tragic secrets with her. Mrs. Jelphs and Ruck are interesting characters as well. Ruck has a little bit of old Joseph, the caretaker of Wuthering Heights, and Mrs. Jelphs might be Jane Eyre‘s Mrs. Fairfax or perhaps Rebecca‘s Mrs. Danvers. In fact, the novel manages to pay homage to these forbears without ever coming across as derivative.

Perhaps one of the most interesting aspects of the book is its exploration of women in the Victorian era. Left with few options and no rights as well as abysmal mental health care, some were forced into rest cures or sent to asylums. I thought of Charlotte Perkins Gilman’s brilliant short story “The Yellow Wallpaper” quite a few times as I read. It’s a shameful and shocking part of women’s history.

In the end, the setting is the star, and if Alice is a little bit stupid at the beginning, we can forgive her, as she manages to redeem herself in the ending, which is both satisfying and not as unrealistic as I thought it would be. I definitely felt for Alice in her desperate situation. Though she has a few more options than Elizabeth Stanton before her, she is still a woman with no money of her own, few marriage prospects, and no family support. She will likely remind many readers of the second Mrs. de Winter in Rebecca. I would definitely recommend this book to fans of Jane Eyre, Rebecca, or The Thirteenth Tale. I must hasten to add that this book is not the equal of those I’ve mentioned, but if you liked any of them and want to escape into a good, creepy yarn, you should enjoy this novel.

This was a great final R. I. P. read, though I think I’m going to keep going with the creepy books. It also puts Gloucestershire on the map for the Reading England Challenge and is yet another Historical Fiction Challenge read as well.

Bad Behavior has blocked 780 access attempts in the last 7 days.