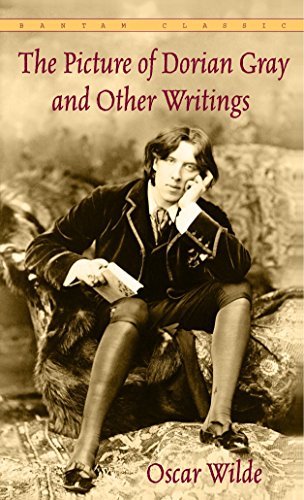 I studied Oscar Wilde’s play, The Importance of Being Earnest in my college British literature course.  I thought it was hilarious.  I particularly love Lady Bracknell’s lines.  An especial favorite is “To lose one parent, Mr. Worthing, may be regarded as a misfortune. To lose both looks like carelessness,” delivered, of course, to Jack.  No doubt about it, Oscar Wilde had rare wit.  Many of his most quotable witticisms appear in The Picture of Dorian Gray, out of the mouth of Lord Henry Wotton.  I’m sure that when most people read this novel, they feel they see Wilde most clearly in Lord Henry.  He is much given to epigrams, and he has a sharp wit, but Wilde claimed that Lord Henry was only his public image; he said he was actually much more like the artist, Basil Hallward, and that he desired to be more like Dorian Gray.  It might make sense to take Wilde at his word in this case, as, like Basil, he was an artist, and perhaps, also like Basil, he was less secure with himself than he appeared to be.

Upon finishing this novel, my first thought was that Anne Rice owes a debt to Oscar Wilde.  Lestat reminds me very much of Dorian Gray in his desire for beauty, his appreciation for the pleasures of life, and his self-loathing.  To be sure, the homoeroticism of The Picture of Dorian Gray certainly reminded me of Anne Rice’s Vampire Chronicles.  Interestingly enough, in trying to discover if any other readers had made this connection through a quick Google search, I discovered actor Stuart Townsend played both characters — Lestat in Queen of the Damned and Dorian Gray in The League of Extraordinary Gentlemen.

I did enjoy the book.  I think it had a clever plot, and I especially loved the device of the painting that reflected the soul of its subject, but I think parts of it might be too talky for my students, which is one reason I’m not sure if it is the one I’ll pick to study in class with them.  Our students read three books over the summer, and the British literature class I’m teaching beginning in August had to read The Picture of Dorian Gray, Brave New World by Aldous Huxley, and The Return of the Native by Thomas Hardy.  Students are assessed over their understanding of two of the books without benefit of classroom discussion.  I haven’t read either of the latter books yet, so I think I’ll wait and see which one has the most fodder for classroom discussion.  Feel free to weigh in with your thoughts if you have read them.

3 thoughts on “The Picture of Dorian Gray”

Books cannot be killed by fire. People die, but books never die. No man and no force can take from the world the books that embody man’s eternal fight against tyranny.