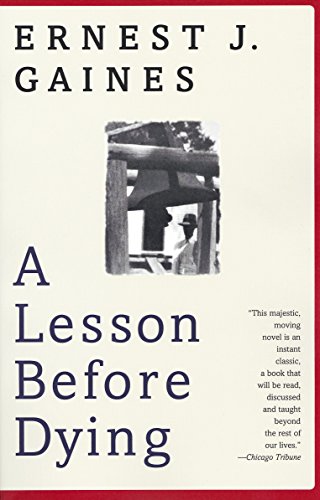 Our school changed summer reading selections, and I determined to read at least all the books I hadn’t read before, even though truth be told it’s time to re-read some of those I have.  One of our new 9th grade selections is Ernest J. Gaines’ A Lesson Before Dying.

Jefferson is a young black man who is in the wrong place at the wrong time.  Falsely accused of murder, tried by a jury of his white “peers,” and sentenced to death by electrocution by a dismissive judge, Jefferson believes the defense attorney’s closing argument:

Gentlemen of the jury, look at him — look at him — look at this.  Do you see a man sitting here?  Do you see a man sitting here?  I ask you, I implore, look carefully — do you see a man sitting here?  Look at the shape of his skull, this face as flat as the palm of my hand — look deeply into those eyes.  Do you see a modicum of intelligence?  Do you see anyone here who could plan a murder, a robbery, can play — can plan — can plan anything?  A cornered animal to strike quickly out of fear, a trait inherited from his ancestors in the deepest jungle of blackest Africa — yes, yes, that he can do — but to plan?  To plan, gentlemen of the jury?  No, gentlemen, this skull here holds no plans. What you see here is a thing that acts on command.  A think to hold the handle of a plow, a thing to load your bales of cotton, a thing to dig your ditches, to chop your wood, to pull your corn.  That is what you see here, but you do not see anything capable of planning a robbery or a murder.  He does not even know the size of his clothes or his shoes.  Ask him to name the months of the year.  Ask him does Christmas come before or after the Fourth of July?  Mention the names of Keats, Byron, Scott, and see whether the eyes will show one moment of recognition.  Ask him to describe a rose, to quote one passage from the Constitution or the Bill of Rights.  Gentlemen of the jury, this man planned a robbery?  Oh, pardon me, I surely did not mean to insult your intelligence by saying “man” — would you please forgive me for committing such an error?…

He is innocent of all charges brought against him.

But let us say he was not.  Let us for a moment say he was not.  What justice would there be to take this life?  Justice, gentlemen?  Why, I would just as soon put a hog in the electric chair as this. (7-8)

Before Jefferson dies, his godmother wants him see that he is a man, and not a hog.  She enlists the teacher at the black plantation school, Grant Wiggins, to help Jefferson learn this lesson before dying.

If you liked To Kill a Mockingbird, you will appreciate this book.  In some ways, it tells a similar story, but while To Kill a Mockingbird is narrated by white children who do not understand the racism that condemned an innocent man, A Lesson Before Dying is narrated by a man who understands, but as a black man himself, feels powerless to change anything about the society in which he lives.

If you are a teacher with some control over novel choices, you might consider bringing this novel into the curriculum.  It is rich material for discussion.  For some students, I think it could be one of those books that changes the way they look at issues such as racism and the death penalty.

6 thoughts on “A Lesson Before Dying”

Bad Behavior has blocked 468 access attempts in the last 7 days.