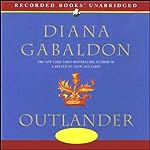 I took advantage of the time I had during a recent car trip to finish Diana Gabaldon’s novel [amazon_link id=”1419381016″ target=”_blank” ]Outlander[/amazon_link] for the third time (but for the first time as an audio book). I have reviewed the book previously. I am a big fan of Gabaldon’s, and the first time I read the series, which at that time only included four books, I couldn’t wait for the fifth book. When it did finally come out, I didn’t get through much of it before I set it aside, so I’m hoping participating in the Outlander Challenge will help me finish the series.

For those not in the know, Outlander is the story of Claire, a nurse during World War II, who travels to the Scottish Highlands for a second honeymoon with her husband Frank and finds herself mysteriously transported about 200 years in the past, where she is almost immediately confronted by her husband’s ancestor, Jonathan “Black Jack” Randall, an English officer garrisoned in Scotland. She is rescued from the clutches of Black Jack by members of the Clan MacKenzie, who take her to their stronghold, Castle Leoch. Claire finds herself drawn to Jamie, a young man in the MacKenzie party. She establishes herself as a healer in the castle and though she never stops trying to figure out how to return to Frank, she begins to build a life for herself in the past. Later, she is forced to marry Jamie in order to protect herself from Black Jack and the English army, and it is after that event that her adventures truly begin.

One of the things I noticed for the first time on this reading is the long scenes that in another book might simply have been cut. Gabaldon tends to write scenes and stitch them together later rather than write in a linear fashion. I know this because I have heard her speak about her writing process. It has benefits and drawbacks. One of the benefits is that readers feel they have intimate connections to the characters through vignettes that develop the characters into fully fleshed people. Gabaldon is gifted with description. No reader should have any trouble picturing her scenes. However, one of the drawbacks, and it’s something I really only noticed on this read, is that some scenes feel superfluous and don’t really develop the plot so much as the characters. I am huge fan of characters and will enjoy a book with good character development over a book with weaker characters and a fast, tight plot, but on this read, I really noticed the fact that much of the writing was unnecessary. Given the length of the book, that is kind of a problem. And the books only progressively get longer. I may not mind as much with the rest of the series because I have only read the next three books once, and I have never read the final three. I might find I enjoy the ride a little more when the plot is not quite as familiar, and truthfully, I don’t think most readers would have a problem with the superfluous scenes given how engaging a writer Gabaldon is.

Davina Porter is a superb reader, and listening to the books will give readers a whole new appreciation for Gabaldon’s Scots.

I’m counting this book as my romance novel for the Mixing it Up Challenge.