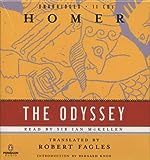 If you have an Audible membership, you should totally use one of your credits to purchase The Odyssey read by Ian McKellen. It is the Fagles translation, which I had not previously read. As you might imagine if you have ever seen McKellen act, he is a masterful reader, and given the material he has to work with in this instance, you can’t miss. I seem to remember that Jenny once said that Fagles was her favorite translation, but I can’t remember if she said why. I believe she was a Classics major as well. I have previously read the Fitzgerald translation, and while I appreciate its beauty, and I understand his reasons for preserving the Greek spellings for names, it was a little confusing. I used a translation by Stanley Lombardo when I taught sometimes as well.

One of the things that struck me again upon listening to The Odyssey is how modern it sounds. People certainly haven’t changed much, and The Odyssey lays bare human nature from the ridiculous to the sublime. I love it. My favorite parts of the book cover the period beginning in Book 9, when Odysseus encounters the Cyclops, to Book Twelve, when Odysseus’s crew is destroyed by Scylla and Charybdis, and he washes up on Ogygia and is held captive by Calypso.

After listening to this version, I was quite struck by how much the poem focuses on loyalty. Penelope is considered throughout all Greece to be the epitome of the loyal wife because she refuses to acknowledge her husband’s purported death and marry one of the many suitors courting her. In truth, they’re all so boorish one doesn’t wonder that she refuses to marry any of them. Eumaeus, Eurycleia, and Argus the dog are all held up as shining examples of loyalty as well. It is not as though I had not noticed this aspect of the poem before, but I think listening to it helped me to see the emphasis on loyalty as it runs throughout. But what bothers me, I guess (as it always has) is the double-standard. Odysseus is not expected to be loyal to his wife or his servants. Their loyalty to him is praised, but his disloyalty is not remarked upon. True that it was written at a different time with different values.

I had completely forgotten the suitors show up in Hades at the end and talk with Agamemnon. For a few minutes, I thought that there was something wrong with my recording, and it had somehow switched back to the part when Odysseus goes into Hades to speak with Tiresias. It felt completely new to me. I wondered at the fact that the suitors blamed Penelope for their downfall. Naturally!

This translation and narration is spot on and gorgeous. I highly recommend it.

3 thoughts on “The Odyssey, Homer, Narrated by Ian McKellen”