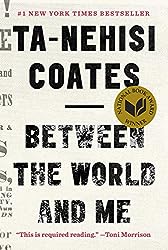 I can’t believe it took me this long to finally pick up Between the World and Me. I’ve wanted to read it for months. I finally purchased it for my Kindle back in November, and it sat there on my Kindle for two months before I finally read it today.

I almost feel like I shouldn’t explain what this book is about because I feel like the last person to have read it, but in the event I’m not, and in the event you haven’t bumped into this book yet, Between the World and Me is a letter from Coates to his teenage son, but beyond that, it is a meditation on the history of race relations in America, a stark condemnation of the American Dream, and a powerful narrative of the current (and historical) climate of police brutality. In the Goodreads description:

In a profound work that pivots from the biggest questions about American history and ideals to the most intimate concerns of a father for his son, Ta-Nehisi Coates offers a powerful new framework for understanding our nation’s history and current crisis. Americans have built an empire on the idea of “race,” a falsehood that damages us all but falls most heavily on the bodies of black women and men—bodies exploited through slavery and segregation, and, today, threatened, locked up, and murdered out of all proportion. What is it like to inhabit a black body and find a way to live within it? And how can we all honestly reckon with this fraught history and free ourselves from its burden?

I don’t often say this about a book because I think reading is often intensely personal, and what we like and don’t like doesn’t always translate to others, but I think everyone should read this book. They probably won’t. In fact, the people who most need to read this book probably won’t read it. I’m intensely glad that I did. I learned a lot, and this book has made me think more than most of the books I’ve read. In many ways, I feel like I’ve been waking up to some hard truths about the world and specifically about America, and as a teacher, I feel responsible for my role in helping students make sense of the world around them. One feeling I had as I finished this book is a sense of failure. I know, especially early in my career, that I was not a good teacher (because I was green, mainly), but more specifically, I was a terrible teacher for the young black students in my classes because I didn’t know and didn’t understand so much.

Of this book, Toni Morrison, a writer I respect a great deal, says:

I’ve been wondering who might fill the intellectual void that plagued me after James Baldwin died. Clearly it is Ta-Nehisi Coates. The language of Between the World and Me, like Coates’s journey, is visceral, eloquent, and beautifully redemptive. And its examination of the hazards and hopes of black male life is as profound as it is revelatory. This is required reading.

I can’t make a stronger point than Toni Morrison. If you haven’t read this book, you should, but be prepared to have your world shaken. It is one of those books that might make you measure your life in terms of before you read it and after you read it. It is beautifully written essential reading.

I purchased this book in November, but it’s been on my TBR list for a while. I’m counting it toward both the Shelf Love Challenge and the Mount TBR Challenge. I’m chipping away at both of these challenges at a clip. I may need to up my participation level. It’s been good motivation to clear out some items on my TBR list and my shelves.

4 thoughts on “Review: Between the World and Me, Ta-Nehisi Coates”