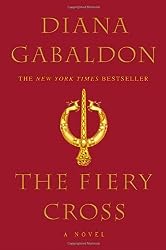 I finished my first audio book of the year, The Fiery Cross by Diana Gabaldon, fifth book in the Outlander series. If you are not familiar with the series, it is now eight books long (and I don’t think she’s done yet!), not including the novellas, short stories, and Lord John Grey books. All of the books are quite long and chronicle the story of Claire, who was a World War II nurse on a second honeymoon with her husband Frank in Scotland when she steps through standing stones and finds herself about 200 years in the past. Starz has screened part of the first book, Outlander. The Starz series will return in April. I do love the books. But I have a caveat about this one, as you’ll see if you keep reading. However, there are a few spoilery bits throughout this review, so proceed carefully if you haven’t read all the books and want to read them.

I started listening to The Fiery Cross so long ago I can’t remember when I began it, but it was likely in September 2014 some time. It’s over 55 hours long. I mostly listened to it while making soap or puttering around the house doing chores. It seemed to take forever to finish.

The Fiery Cross picks up where Drums of Autumn (review) leaves off. Jamie and Claire are settled in Fraser’s Ridge, but the Revolutionary War looms on the horizon, and nothing brings that impending danger into sharper focus than when Jamie is commanded by the governor to muster a militia in response to a rebellion. Roger and Brianna, now properly married, settle on the Ridge as well and ease into their new lives in the 18th century. All sorts of horrific things happen, including the return of Stephen Bonnet, horrible villain, rapist, pirate, and worse scourge on the Fraser family, as it turns out, than old Black Jack Randall ever was. At least Randall died. (Oops! That might have been a spoiler. Sorry.)

The most fascinating part of the book doesn’t come until the end, when one of my favorite minor characters returns and brings with him some really excellent information in the form of a mysterious journal left behind by a man known as Otter-Tooth—a man whom Claire is certain was also a time traveler.

This book ties up several loose ends from the previous book, but as the series goes, it’s my least favorite so far. Lots and lots of details, and perhaps some editing was needed. Gabaldon does quite a bit of research, and it seemed that she wanted to show just about everything she’d ever learned about 18th century life off in this book. As such, parts of it are plodding and not much happens. I felt the first few books were much more tightly written in terms of action, but this book continues in the vein of its immediate predecessor, which I don’t much like either. Of course, it’s Diana Gabaldon, and expertly read by Davina Porter, so I won’t give it less than 3½ stars—even “bad” Diana Gabaldon is better than a lot of stuff. She’s a good writer, and she has a lot of fans for a good reason.

One quibble I do have with the book, however, and perhaps I only notice it because I make soap, is that Gabaldon gets some things about soap making wrong. To wit:

I hope that exposition didn’t bore, but the repeated incorrect understandings about the chemistry behind soap making bothered me, as similar issues would likely bother most folks who have some area of expertise that is not quite properly understood by a writer.

I would not advise the casual fan to read this one. If your goal is just to know what happens in the story, skip this one and look up a synopsis. In fact, don’t read it at all if you haven’t read the previous four because you will not be able to follow it at all. If you prefer Claire and Jamie in Scotland, definitely skip it. If you are a true fan of the series and have read the previous four books, do read it if only to find out what happens for two main reasons—Otter-Tooth’s journal at the end is totally worth knowing. I might actually re-read that part in the paper copy of the book I have, and also a reference to Master Raymond, whom Gabaldon has said before is a prehistoric time traveler and possible ancestor of Claire. I hope we do read more about that guy in future books, and I do hope we learn a lot more about how time travel works, too.

So yes, I’ll read the rest of the series even if it’s more of the same. I will give Diana Gabaldon this credit—even when she’s in desperate need of an editor, she’s still better than most of the stuff out there. But when she’s really on, she’s fantastic. In my opinion, she wasn’t really “on” with this book, but I won’t give up on her yet.

We read to know that we are not alone.

Bad Behavior has blocked 615 access attempts in the last 7 days.