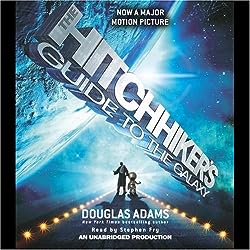 I may in fact be the last person on Earth to read The Hitchhiker’s Guide to the Galaxy. I will, therefore, dispense with any summary. The Internet makes a lot more sense to me now that I’ve read this book.

Stephen Fry’s narration was excellent. He gave the perfect irritating note (in an American accent) to the ship’s computer. He made Zaphod Beeblebrox sound a little bit like Austin Powers, but not so much that you decide he’s not cool.

If I had to pick favorite parts, they would be as follows (in no particular order):

I first tried to read this book when I was in sixth grade, and perhaps some sixth graders could have read it and appreciated it quite a lot, but I didn’t get it, so I put it down without finishing it. Then years passed, and for one reason and another, I never managed to pick it up again until now. It’s hard to believe it was written in 1979, as much of seems prescient while other parts of it are timeless. It’s quite funny, and I could definitely see its influence on other writers I enjoy, such as Neil Gaiman. I see its influence on Doctor Who as well. And yes, I realize Douglas Adams wrote for that series.

So, one more book I should have read a long time ago crossed off the list, and wouldn’t it have been perfect if I had read it last year, when I was 42? My daughter Maggie told me on my birthday that year that I was “the answer to life, the Universe, and everything.”

Bad Behavior has blocked 561 access attempts in the last 7 days.