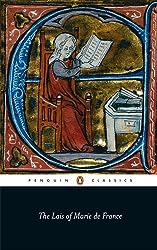 When I was in college, I took a course in medieval literature. One of our texts was the Penguin translation of The Lais of Marie de France by Glyn S. Burgess and Keith Busby. I don’t recall that we read all of the lais. I actually don’t remember which ones I did read. I only really recall that I liked them. That’s what twenty years will do, especially when you didn’t keep a reading journal.

I re-read The Lais of Marie de France mainly for the Literary Movement Reading Challenge. I had wanted to re-read the book after visiting one of our AP Literature classes at school and listening to the students engage in fishbowl discussions about the lays. They had some fascinating ideas about the stories. I walked away thinking I had to find my copy of this book and take it off the shelf because I had no memory of my medieval literature professor interpreting and discussing the lays the way these students did.

The Lais of Marie de France is an interesting text because Marie is one of the first woman poets, and according to the book’s introduction, she’s the “first woman of her times to have written successfully in the vernacular” (17). Yet, we don’t know exactly who she was. Scholars speculate that she was known in the court of Henry II, and several candidates have been put forward as Marie. The Lais of Marie de France is a collection of twelve Breton lays, two of which have Arthurian connections—”Lanval,” the story of a knight in Arthur’s court, and “Chevrefoil,” a short lay about Tristan and Iseult (characters sometimes connected with Arthurian legends). Most of the lays concern love, particularly courtly love between a worthy knight and a lady. Rather than discuss each of the lays, I’ll share some thoughts about a couple of my favorites.

“Bisclavret” is about a baron who turns into a werewolf. His wife tricks him into telling her where he hides his clothes when he transforms, and she takes them away. Without his clothes, he is not able to transform back into a man. He comes upon the king, out hunting, and the king realizes that he is not a true wolf and takes him back to his court. Eventually, the baron’s wife and her lover come to the court, and Bisclavret attacks them, after which all is revealed and the wife’s treachery is laid bare. It’s an interesting early werewolf story. Bisclavret is not necessarily dangerous in his wolf form, as most werewolves are usually depicted, though he does attack those whom he feels have wronged him.

“Lanval” reminded me a little bit of some of the similar medieval stories about a knight who falls in love with a woman who will be beautiful in his presence at night, but ugly in the day. All his peers will think he is in love with a hag. In fact, “The Wife of Bath’s Tale” in The Canterbury Tales is a version of this story. Typically, the woman gives the knight the opportunity to select which way she will remain: beautiful, but not true to him alone, or ugly but faithful. Another version of this story concerns Sir Gawain and Dame Ragnelle. In “Lanval,” Lanval falls in love with a beautiful, otherworldly lady, but he alone is allowed to know about her existence, or she will desert him. When Guinevere sidles over to Lanval one day and tries to convince him to engage in some hanky panky, he resists, saying he cannot betray his king. Guinevere pulls a variation on the “well, then, I bet you’re gay,” and Lanval retorts, “no, I’m not, and the lady I love is fairer than you; heck, even her maids are fairer than you.” And of course he can’t prove it because he wasn’t supposed to talk about her, so she won’t come back. Then, Lanval is put on trial for insulting Guinevere, and finally Lanval’s lady shows up to rescue him and takes him away to Avalon. She’s obviously a fairy or something like. Guinevere comes off terrible no matter which way you look at it.

I enjoyed reading most of the lays, though I didn’t like the last, “Eliduc,” as much as the others. I realize we’re talking about a different time and place, but I felt Eliduc’s wife sort of rolled over for him. I guess spoiler alerts are over for literature written nearly 1,000 years ago, but I’d rather just leave it at that and let you read it if you will. The lays don’t send consistent messages. “Bisclavret” condemns the adulterous relationship of Bisclavret’s wife, while in several of the others, the adulterers are rewarded for their faithful love to one another, particularly if the husband or wife was unreasonable. I would say the exception is “Eliduc,” but perhaps that’s because in that story, it’s the husband who falls in love with another woman, whereas in most of the stories, a wronged wife falls in love with another man. There are also obvious strands of female power that run through the stories. In some cases, women who “overreach” are put in their places, while in others, they are rewarded.

The Lais of Marie de France is an excellent example of medieval literature, and refreshing, too, in being an early example of women’s writing. The stories are charming, and the book is a quick (though not a light) read. This translation is accessible without a lot of interfering notes, too. I like notes sometimes, but most books like this one have way too many, and you never know until you flip to the back and read the note whether it will be a helpful gloss or something far deeper in the weeds than you felt like going. The book also includes a helpful index of proper names and a selected bibliography.

I am also counting this book as my selection for a classic read in translation for the Back to the Classics Challenge. The Lais of Marie de France were originally composed in Anglo-Norman French, and the book includes a selection of the lay “Laüstic” in the original language.

Bad Behavior has blocked 595 access attempts in the last 7 days.