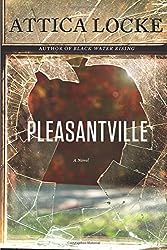 Jay Porter, the hero of Attica Locke’s new novel Pleasantville, has had a devastating year. Barely able to cope with the death of his wife, he finds himself a single father to his two children and his law practice is shriveling on the vine. He won a major victory against Cole Oil, but appeals have dragged the case on, and Porter is losing his conviction that he will ever see a dime of the money his clients were awarded. Furthermore, so are his clients, who are being wooed away by a slick attorney trying to make a buck. Meanwhile, Jay’s office is broken into, and a young girl connected with the Houston mayoral campaign goes missing, and Jay is dragged into the crime when he is coerced into taking on one more difficult case—this time, a murder trial.

I have never read the first book about Jay Porter, Black Water Rising. I loved Locke’s novel, The Cutting Season, however. I think reading Black Water Rising would probably have been helpful, as I know I might have understood some elements of Pleasantville a little better. I do wish I’d kept a character list or that one had been provided. I found some of the characters difficult to distinguish from one another (it could just be me, however). Pleasantville is a tight crime thriller. I might compare it to a John Grisham novel had I read one, though having seen the movies, I have an idea this novel is along those lines. In some places, the pace dragged a bit for me, but I always wanted to finish and find out what would happen, and as the court case really started, I finished the book in two big gulps. I think it might make a pretty good movie as well. The political intrigues were fascinating in their way. Politics are dirty business. The ending also went a little crazy for me, and some aspects of it seemed a little far-fetched, but overall, I have to say I enjoyed reading this book. I think anyone who likes a crime thriller, courtroom novel, or a good mystery would enjoy Pleasantville.

Attica Locke is the author of the widely acclaimed debut novel Black Water Rising, which was nominated for a Los Angeles Times Book Prize, an Edgar Award, and an NAACP Image Award, and was shortlisted for the UK’s Orange Prize. She lives in Los Angeles with her husband and daughter.