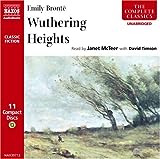 I became a member of Audible last month. To me, $14.95 a month for an audio book each month seemed like a fairly good deal. I know that Audible uses DRM, and some folks have a problem with that, but if I am just going to listen to the book on my iPhone or computer, it shouldn’t be a problem. When you join Audible, they give you a free audio book, and I did not hesitate a bit in choosing my first book: Wuthering Heights. My only hesitation was in wondering which version to choose. I decided on a version read by David Timson and Janet McTeer. If you have any interest in an audio version of Wuthering Heights, I cannot recommend this version highly enough. Timson takes on the role of Mr. Lockwood to McTeer’s Nelly Dean, and both of them capture their respective characters beautifully. Janet McTeer does a masterful reading of the Yorkshire dialects of Joseph and Hareton; she manages to make each character distinct. Her rendering of Linton Heathcliff is dead on.

I was struck anew by my original sentiment. The characters are on one level easy to dislike, but strangely sympathetic. I said after originally reading the book, “one thing I think Brontë did quite well is paint characters who while flawed and perhaps even reprehensible, still manage to evoke the reader’s sympathy.” Heathcliff is such a person. How to reconcile his great love for Catherine (and the pure poetry Brontë places in his mouth upon her death) with his wickedness to others. He lashes out like a wounded animal, effectively alienating anyone who might have been a friend to him. Yet he is strangely charismatic. Hareton, for instance, is drawn to that side of him, as is Isabella Linton (at least at first). I really liked Hareton much more in this reading.

I will mention that the background on my computer is a photograph taken of Top Withens, believed to be the inspiration for Wuthering Heights, with the great cloudy sky and moors stretched out below. A solitary tree stands sentinel over the ruins. It’s how I imagine Wuthering Heights would look today: abandoned by Hareton and Cathy for Thrushcross Grange and left to decay as Joseph passed on.

I think Wuthering Heights is one of those books that is under my skin. I think about it a lot. I can’t explain very well to anyone why I like it so much. The characters are not those plucky good sorts of people. You don’t really root for them. No, they provoke you and make you feel for them in spite of it. I don’t rightly know what to make of my fascination with this book.

This book is my second selection for the  All About the Brontës Challenge and the first for the Typically British Reading Challenge. I need to read at least one more Brontë-related book for the first challenge, and I need to read three more British novels to meet the level of the British Challenge to which I’ve committed. I am currently working on Thursday Next: First Among Sequels, but aside from this book, I’m not sure what other books will comprise my the challenges. However, my next audio book will be The Help, as I have had it recommended by two colleagues.

Wow. Wuthering Heights. Just brilliant. What a genius Emily Brontë was. Thank goodness she left something of it behind.

Bad Behavior has blocked 887 access attempts in the last 7 days.