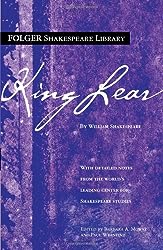 At one point, if you had asked me what my favorite Shakespeare play was, I probably would have said King Lear. I can’t say with certainty that my answer is still the same, but it’s because there are so many of his plays that I love. In fact, most often, I say it’s A Midsummer Night’s Dream. I do love teaching Shakespeare. There is so much richness, and if I do agree with Harold Bloom on anything, I think I can at least agree that Shakespeare seemed to understand the spectrum of human nature like no other writer (I am not sure I’d say he invented the human). This play in particular examines the complexity of family in some really fascinating ways. I will be curious to see what sort of a backstory my students imagine for this family. Why would Goneril and Regan cut their father out? What had their childhood been like? Was Cordelia’s different? Ian McKellen says he imagines that perhaps Cordelia is the daughter of Lear’s second, more beloved wife, whom he lost in childbirth, and that when he looks on Cordelia, he sees this beloved wife. I find I like that idea quite a lot.

As I re-read, I decided to listen to a production. The Naxos Audio production is brilliant. A word to the wise: if you listen to this production and follow along, be mindful of the fact that it uses the First Folio text, which differs from some published editions of the play that also incorporate the First Quarto. Lear is played in this audio book by the great Paul Scofield. It was published to commemorate Scofield’s own 80’s birthday (Lear mentions being “four score” in the play). He is brilliant in the role. I actually teared up listening to his reunion with Cordelia in Act IV, and his tears over her death were also hard to take. Lear is hard; he casts away the daughter and servant (Kent) who love him in favor of those who tell him what he wants to hear, and finds out his mistake too late. He’s a hard man to feel empathy for, but Scofield definitely manages the task. Kenneth Branagh plays the Fool and Toby Stephens plays Edmund.

In addition to the Naxos Audio production, I also listened to a Shakespeare Appreciated production that includes commentary. I found the commentary, particularly the historical context, extremely helpful. If you are a student or really want to wring all the understanding out of the play that you can, I would recommend this audio version. I don’t think the dramatization is as good as the Naxos Audio production, but it is still good, and the commentary is especially helpful.

I am waiting on tenterhooks for James Shapiro’s new book The Year of Lear: Shakespeare in 1606 to come out (October 6!). Very excited to learn even more about the historical context that produced this play, especially because Shakespeare changed the ending familiar to audiences to a tragic one in which SPOILERS pretty much everyone dies.

I’m counting this as my book set in Kent for the Reading England Challenge. Much of the action at the end of the play takes place at Dover. I’m counting it for the Historical Fiction Challenge, too, as it is set in ancient Britain, and Shakespeare was writing in Renaissance England. It does imagine a pre-Christian era in Britain. I can’t count it for R. I. P., as I started it before the challenge. It might qualify, though, if you want to read it for that challenge. Gloucester’s eyes being gouged out is the most ghastly thing in Shakespeare, if you ask me.

2 thoughts on “Re-Reading King Lear: “Read Thou This Challenge””

Bad Behavior has blocked 635 access attempts in the last 7 days.