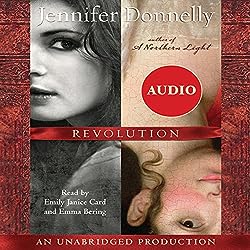 I believe I’ve just finished reading my last book of 2015, and it was a re-read of one of my favorites, Jennifer Donnelly’s novel Revolution. This time, I listened to the audio book. I have this book in hardcover, Kindle, and audio book, but I hadn’t listened to it until this week. It was even better on a re-read than it was the first time I read it.

Since I reviewed the book last time I read it, this time, I really want to mention a couple of things that struck me. First, this book is tightly written. It all works. I picked up on so many things I missed on a first reading. The sections of Dante’s poetry correspond well to Andi’s descent into darkness and her literal descent into hell in the catacombs, where she is, naturally, accompanied by Virgil. I was so swept away with the plot the first time I read that I missed some of the artistry of the writing. Equally impressive is Donnelly’s research. She fictionalizes some details. Andi’s thesis focus, the composer Amadé Mahlerbeau, is fictional, as are her Nobel-prize winning father and his historian friend G. However, they all have their basis in historical or contemporary figures who do similar work. Another thing I noticed about Donnelly’s writing is that she allows the reader to be creative and connect the dots. She doesn’t knock you over the head with the connections. She wants you to do the work. She wants you to do some digging and find out what she has learned.

I also noticed how well Donnelly pulls off the twinning. Maximilien Robespierre and the schizophrenic Maximilien R. Peters, who is responsible for the death of Andi’s brother Truman, work very well in a pair and serve as an interesting symbol of the brutality and stupidity of the world and the cyclical nature of history’s desperate individuals. It’s almost not too hard to believe that Alex might reach across history, 200 years in the future, to save Andi and let her know that just because the world goes on, stupid and brutal, it doesn’t mean that she has to—she can be a positive force for good in the world. She can make people happy. The world can be a scary, crazy place. Particularly today, we see a lot of stories in the news that make us despair and make us want to give up. Perhaps in the end, all we have left to do is to do the good that we can. We don’t have to participate in the world’s brutality and stupidity.

Donnelly said in an interview that “a good story with a compelling character that’s well written should appeal to anybody.” I think that’s why this book is so good. Andi may be a teenager, but the fact that she is a young protagonist doesn’t make her story any less applicable or interesting. This book really makes me want to write, and that’s always the sign of a really good book to me—the ones that make me want to write.

Emily Janice Card narrated most of the book, while Emma Bering narrated Alex’s diary entries. Both narrators were brilliant. Card especially does a brilliant job bringing Andi’s sarcastic and hard edge to life. You can hear the chip on her shoulder. Card happens to be the daughter of Orson Scott Card. I read that she was named for two of my favorite writers (and Orson Scott Card’s, apparently): Emily Dickinson and Emily Brontë. I really didn’t want to stop listening to this book. I have to be doing something mindless while I listen to audio books or else I get distracted from the story. When I didn’t have anything mindless to occupy me while listening to this book, I pulled my hardcover off the shelf and read along with the narrators. I need to go back and re-read a few favorite passages.

Last time I read this book, I was craving more books just like it, but I’m afraid there probably aren’t any. It’s brilliant.

Keep scrolling for the book’s playlist. You don’t want to miss it.

The playlist for this particular book is massive and varied, as Andi is one of those folks who loves music. All kinds. I suspect it needs a bit of revision because there are musical references on just about every page of the book. That’s another thing I love about it. The music.

Bad Behavior has blocked 447 access attempts in the last 7 days.