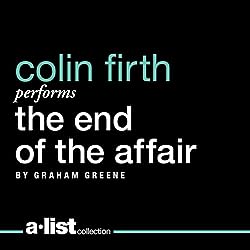 I’ve been listening to Graham Greene’s The End of the Affair narrated by Colin Firth as I have puttered around the house, washing dishes or making soap, for about a month now.

This production was the Audiobook of the Year at the Audies in 2012. It is, in fact, a beautifully read audio book (which I will get to in a moment).

The End of the Affair is the story of Maurice Bendrix, who is reflecting on an affair he had with Sarah Miles, wife of Henry Miles. During the war, Maurice’s apartment building suffers damage as a result of German bombing, and Maurice is knocked unconscious. He wakes to find Sarah looking over him, and he quickly realizes something is wrong. Sarah abruptly calls off her affair with Maurice. Thinking it must be another man, Maurice hires a private detective to follow Sarah. Rather than losing Sarah to another man, Maurice discovers he’s lost her to something much larger and more complicated than he imagined.

I was surprisingly moved by this story. I think it was perhaps the unlikely friendship of Maurice and Henry, the wronged husband. I don’t want to give away plot points if you want to read the novel, but the two men form a bond, and the strangest thing about the bond is how “not weird” it is. In fact, the way Greene sets it up, it makes perfect sense in the context of the story. Despite glimpses at her personality through her diary and letters, Sarah remains more of an enigma than Maurice and Henry. Greene’s characterization of all the characters, whether major or minor, is rendered realistically. I did feel as if all the people I read about existed somewhere, and that this story might really have happened to them.

The novel is also an interesting study of psychology. Greene is an astute observer of humanity. Those interested in Kübler-Ross’s theories about the acceptance of death (here applied to the end of an affair), will recognize much of Maurice and Sarah’s behavior, even though Kübler-Ross’s model of the stages of grief was not published until 1969. In particular, the book focuses a great deal on bargaining, which I found interesting. Maurice’s arc as he moves through the stages is particularly fascinating psychologically, but to say much more would spoil the plot.

Colin Firth is an expert reader. Of course, you would imagine that he would be. He renders Henry Miles’s parts in a sort of Mark Gatiss tone that is perfect for the character. I think I could honestly have listened to Firth read the phone book and be mildly entertained. He gives the same breadth and nuance to this performance as he does to his acting performances. He’s an excellent narrator.

Published in 1951, The End of the Affair is my selection for a 20th Century Classic in the Back to the Classics Challenge.

Bad Behavior has blocked 456 access attempts in the last 7 days.