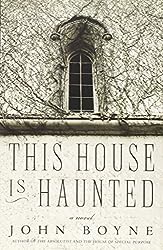 4 thoughts on “Review: This House is Haunted, John Boyne”

Bad Behavior has blocked 789 access attempts in the last 7 days.