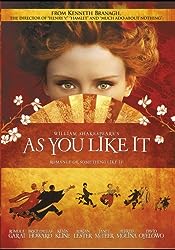 2 thoughts on “Review: As You Like It, William Shakespeare”