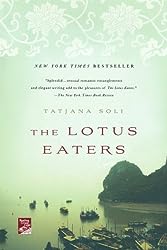 Walt Whitman once said that “the real war will never get in the books,” but that hasn’t stopped writers from trying, from Stephen Crane to Ernest Hemingway to Tim O’Brien. Tatjana Soli’s debut novel The Lotus Eaters tells the story of a woman photojournalist, Helen Adams, who covers Vietnam. Helen is drawn to cover the conflict in order to find out what happened to her brother Michael, who was killed in action. Even long after she discovers the truth, she has been seduced by the war, the country, and its people—both repulsed by the horrors she sees and compelled to cover them, hence Soli’s title, inspired by Homer’s land of the Lotus-eaters in a quote that opens the novel:

… we reached the country of the Lotus-eaters, a race that eat the flowery lotus fruit … Now these natives had no intention of killing my comrades; what they did was to give them some lotus to taste. Those who ate the honeyed fruit of the plant lost any wish to come back and bring us news. All they now wanted was to stay where they were with the Lotus-eaters, to browse on the lotus, and to forget all thoughts of return.

I remember first reading The Odyssey and finding the passage about the Lotus-eaters poignant, even though it’s short and perhaps not as striking in terms of its danger as other passages involving the Cyclops, Circe, and Scylla and Charybdis. In their way, the Lotus-eaters might be the most dangerous group of people Odysseus and his men encounter because one thing that keeps them going is their desire for home. The title is an apt one for the novel.

Helen arrives in Vietnam a naive young woman who dropped out of college to become a freelance photographer because she was afraid that if she waited until graduation, the war would be over. She has only rudimentary photography skills, and she’s woefully unprepared for what she will see. However, she learns quickly and discovers she has a natural talent for capturing a shot. By the end of the war, she is a respected photojournalist with several Life magazine covers under her belt. She has an opportunity to escape with her fellow photojournalist (and lover) Linh as the last Americans are leaving Saigon. Linh is wounded, and Helen is concerned about his safety. As the helicopter prepares to leave, Helen decides she has to stay through the Fall of Saigon and cover the very end, but she ensures Linh is safely aboard the helicopter and on his way to treatment before she plunges one more time into the war.

The novel begins at the Fall of Saigon and then steps back in time to Helen’s arrival, tracing her experiences through the war and back to the end of the war. Soli explains the frame device and why she used it in this video:

The book’s language is gorgeous, and I found as I read that I had to underline passages. I don’t typically do that when I read paper books, unless I plan to teach them, but this novel is so beautiful, and I found so much truth in the language, that I had to mark it up.

To be honest, I don’t know a lot about Vietnam. I teach several students from that country in my classes, and I have learned some really interesting things from them, but I haven’t read a lot about the war. My father was in Vietnam when I was born, and as far as I know, he was never in a position of extreme danger, but that’s relative when you’re in a war-torn country. I think I have actually avoided the subject to a certain degree. The senselessness of the whole thing is heartbreaking, and perhaps more so now that I’ve read this book. One thing Soli does that intrigues me is she captures the brutality and horror of the war, yes, but she also captures the beauty of the country and its people.

The patrol was still out, and they watched the sun rise up out of the east and color the western mountains from a dull blackish purple to green. So many shades of green. Darrow said, that Vietnamese legend told that every shade of green in the world originated in this mountain range. The emerald backbone of the dragon from which the people of Vietnam sprang. Until then she had been blind, but when she saw those mountains, she slipped beneath the surface of the war and found the country. (17)

The air boiled hot and opaque, the sky a hard, saline blue. For miles the black mangrove swamp spread like a stagnant ocean, clotted, arthritic. Farther on they passed the swollen tributaries of the Mekong. Papaya, grapefruit, water palm, mangosteen, orange—fruit of every variety grew in abundance, dropping with heavy thuds on the ground to burst in hot flower in the sun. (162)

I found the characters easy to become invested in. I liked them, and at the same time, they infuriated me, which I think is partly the point. They were driven in a way I can’t claim to have experienced, but Soli infuses them with reality—they seem like flesh-and-blood people rather than figments of the imagination. By the end of the novel, their compulsion to capture the war makes a sort of sense.

The narrative is as intriguing as the characters. The last 100 pages or so I read in almost one gulp in an attempt to find out if everyone would be okay in the end. Some passages are so gripping in their imagery that I had to put the book down and catch my breath—to come up for air in the real world, as it were.

Even more than the characters and the narrative, however, I loved Soli’s writing. She tells a gripping story with lush, beautiful language that actually made me long to see the places she was describing, even in the midst of the horrors of a war.

I also felt drawn to learn more of the history of the war and of the country. It’s amazing how so many stories of Colonialism—and I’m thinking here of Heart of Darkness, The God of Small Things, The Poisonwood Bible, and Things Fall Apart—eventually wind up traveling down the same roads. And yet. It’s a story we repeat over and over again. This novel is, in my estimation, as good as any of these books, and I can’t give it higher praise than that.

I’m calling this one a new favorite, and I’m recommending it to everyone. I haven’t read such a lyrically beautiful, haunting book in quite some time. I can’t understand why this book isn’t more known. Or perhaps it is and just escaped my radar. I’m not sure it was a bestseller (no claims to that effect, anyway), but it won several awards. It’s literary fiction and a true descendent of books like A Farewell to Arms. A gorgeous book.

You can never get a cup of tea large enough or a book long enough to suit me.