Since last week, when I mentioned that we have all the snow, I can tell you we probably have five feet on the ground with more on the way tonight and tomorrow. My children have yet another snow day tomorrow. My own school just called me to let me know I also do not have school; however, I do believe I have a meeting via Google Hangout, and I need to make some soap for a wholesale account, so I imagine I will be busy. We have had record-breaking snowfall the last few weeks.  The Sunday Post is starting to sound monotonous with the weather report each time. When you’re more or less snowbound, however, there’s not much else going on.

I finally finished listening to the audio book of Diana Gabaldon’s novel The Fiery Cross this week. I also finished reading The Serpent of Venice by Christopher Moore. Look for the review for that book to be posted on 2/17. I started reading four books this week as well:

The Tell-Tale Heart, like The Serpent of Venice, is part of a TLC Book Tour. I’m reading As You Like It as my Renaissance selection for the Literary Movement Challenge. Finished Act I as of yesterday. I am listening to Neil Gaiman read the short story collection Trigger Warning. After finishing The Fiery Cross, I didn’t want to dive right into another really long Gabaldon audio book right away. I have had Marie Antoinette: The Journey in my Kindle library for a very long time, but I finally decided to read it after watching the Kirsten Dunst film Marie Antoinette, which reminded me how fascinated I am by the French Revolution and all the history leading up to it. 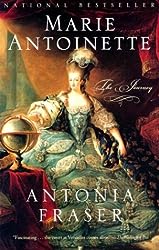 The movie itself, I have to say, was kind of weird. The costumes and sets were gorgeous. The music was strange. Some of the casting was bizarre. The jury’s still out on whether I liked it or not. I searched in vain for a documentary about the French Revolution on Netflix last night, so I decided to start reading the book. Also on my list at some point is Simon Schama’s Citizens: A Chronicle of the French Revolution. I’m always on the lookout for good historical fiction set during this time period as well, so let me know if you know of anything. I have previously read Jennifer Donnelly’s Revolution (loved!), Michelle Moran’s Madame Tussaud, and Melanie Clegg’s The Secret Diary of a Princess. And of course, Charles Dickens’s A Tale of Two Cities. I can’t recall any others, so let me know what I’ve missed. I am not particularly more interested Ancien Régime versus post-Revolution or nobility versus Estates-General. I’m not picky.

I love reading historical fiction, which is one of the reasons I always try to participate in the Historical Fiction Reading Challenge, no matter how active I actually am in the challenge. If I had to peg my favorite periods, I would say 18th and 19th century America (particularly New England, but really, it’s all pretty interesting), the Middle Ages, the Renaissance, 18th century France and England, and 19th century England. I do not much like to read WWII historical fiction, which reminds me of a post of Stefanie’s that I read over at So Many Books: “Books I Won’t Read.” I am not going to go quite so far as to say I will not read books about World War II. I really hesitate, though. I find it mentally exhausting and very depressing to read about that war, for obvious reasons. Inevitably, the books are heart-wrenching. I hate to say it feels like manipulation on the part of authors to write about the events of that war, especially when they really happened, but it’s also quite difficult to criticize. After all, anything you say in critique of books about the Holocaust just makes you sound heartless. So, I’m really careful about what I choose to read from that era. If a book has a whiff of cashing in on that tragedy at all, I can’t read it.

So far, I’ve finished seven books this year. I can’t recall ever having read that many at this point in the year. Honestly, I think the goal I set of reading 52 books has been a good motivator for me. I know I’m making more of an effort to read. I think of myself as a slow reader, but it looks like I have managed to pick up speed over time without noticing much. I very rarely can sit and read an entire book all day, and I haven’t tried timing myself to see how fast I’m actually reading. It’s more just a sense I have that I’m able to read books faster than I have in the past.

The biggest news in the book world this week is the impending publication of Harper Lee’s second novel, Go Set a Watchman, which will feature an adult Scout Finch. Some speculation in the media has made me wonder if Harper Lee was aware of what her lawyer was doing, but it’s hard to tell. This New York Times story does a fair job discussing the controversy. I am going to read the book. I have actually already selected it for my school summer reading choice. I called dibs the day the announcement was made. I am not going to miss another Harper Lee novel. Am I worried it might not be as good as To Kill a Mockingbird? Of course. It’s natural. But there is no way I’m going to miss it. And while I’m on the subject, I wish Goodreads would stop people from reviewing or rating unreleased books. Or, to be more specific, unreleased books that no one has read yet. I actually find ratings and reviews from folks who had uncorrected proofs or early access through other channels helpful. This book already has a 3.72 rating on Goodreads. Come on.

This week’s Top Ten Tuesday focuses on the top ten books I feel as though everyone has read but me. I went to three different high schools. I can’t remember reading a single book for school during all of tenth grade. In fact, all I remember about that year was doing grammar exercises out of the Warriner’s grammar book and feeling that our teacher hated us. Eleventh and twelfth grade were better, but I still managed to graduate from high school (and college, as an English major no less) without having been required to read a lot of books that seem to be staples in the canon.

However! Before the admonitions start in the comments, I would like to add that I have read all of the following books that seem to be cropping up on these lists on other peoples’ blogs today:

So, I am not a complete slouch.

Charles Dickens’s popular novel A Tale of Two Cities is the first Dickens novel I chose to read. I knew I wanted to read a Dickens novel, and Maggie helped me select this one. While it was very well written and some characters were particularly well-drawn, I had more difficulty following the plot and caring about some of the characters than I expected. I suppose I like complicated characters, and the line between the “good guys” and the “bad guys” was so clearly drawn, they might as well have been wearing white hats and black hats. They weren’t particularly interesting for that reason. Dickens also used the novel as a platform to moralize about the violence, and when it waxed poetic, it was interesting, but the frequency verged on annoying, even though I agreed with Dickens’s views about the violence.

Unfortunately, though this book was shorter than others I’ve read on DailyLit, I became overwhelmed with work in the middle of reading it and had to suspend my subscription for an extended period. I think perhaps the long gap between when I began this novel and when I finished it may have increased some of my confusion. I can’t say, however, that I didn’t enjoy it or that it was badly written, for it is clear to me that Dickens is a master of characterization, and I definitely plan to read more Dickens.

My next DailyLit read, however, is Dostoyevsky’s Crime and Punishment, a book I initially tried reading in high school (for fun, no less) and discovered was over my head at the time. If you’ve not tried DailyLit, you should check it out. You can keep track of my DailyLit books progress in the sidebar to the immediate right under the DailyLit section (beneath Reading and Recent Books).