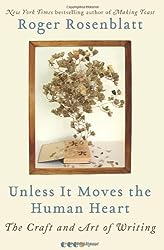 I picked up Roger Rosenblatt’s Unless it Moves the Human Heart: The Craft and Art of Writing based on a recommendation from Marsha McGregor, a teaching fellow at the Kenyon Writer’s Workshop for Teachers in which I participated last week. It’s a tough book to categorize: it’s part memoir, part writing advice, and part model for teaching writing to others. It takes the unusual form of conversation as it tracks a particular writing class’s progress.

Rosenblatt explains in his preface that the book is “fiction, top to bottom” but is based on the real problems and subjects his class discussed. It’s admittedly a somewhat quirky format for a book of this type. As such, it will not appeal to all writers seeking advice (or all writing teachers seeking advice, and certainly not to people looking for a memoir). Rather than offering nuggets of wisdom in the form of bulleted lists or bold headings, Rosenblatt’s understanding of what it means to write and to teach writing is buried within the narrative about one class. As such, it invites careful reading, and I found myself reading some pages over and highlighting often. Even so, it’s a quick, conversational read.

I pulled a few ideas for lessons from its pages. I loved the discussion he shared of James Joyce’s short story “Clay,” which I also stopped to read before continuing with that part of Rosenblatt’s book. He has a another idea for students to create their own anthologies—not of their own work, but of poems they like and want to group together. As Rosenblatt says, “By the end of the course they have created a little book that speaks for their taste” (67). The book has many excellent reading recommendations (a book that added to my TBR pile—just what I need!). In particular, Rosenblatt shares models he uses for teaching personal essays as well as types of personal essays he assigns. His descriptions of class discussions are great models for lessons.

As I write all of this, I wonder if I shouldn’t have reviewed this book on my education blog, whose audience might more be the audience for this book, but I’m not entirely sure. I think anyone who writes might benefit from reading it. As I said, the time investment isn’t great—the book is only about 150 pages—and the dividends are worth it.

Bad Behavior has blocked 772 access attempts in the last 7 days.